I know. I know. Alcohol is a very important part of life for a lot of people.

It's a social lubricant, and a lot of people use it to “reduce” anxiety, stress, depression and more.

But did you know that it might actually be hurting your productivity? Your health? Your relationships? Your wallet? Increasing anxiety, stress?

That it could be leading to depression, suicidal thoughts and more?

So what are the benefits of stopping drinking, even for a little while? Better sleep, sex, and relationships, more money in your pocket, and a whole lot more. We go into it all here.

What are some of the dangers? In this video, Frank and I discuss our own challenges with alcohol, including all the things we learned about quitting for an extended period of time, and share our various takeaways with you all. 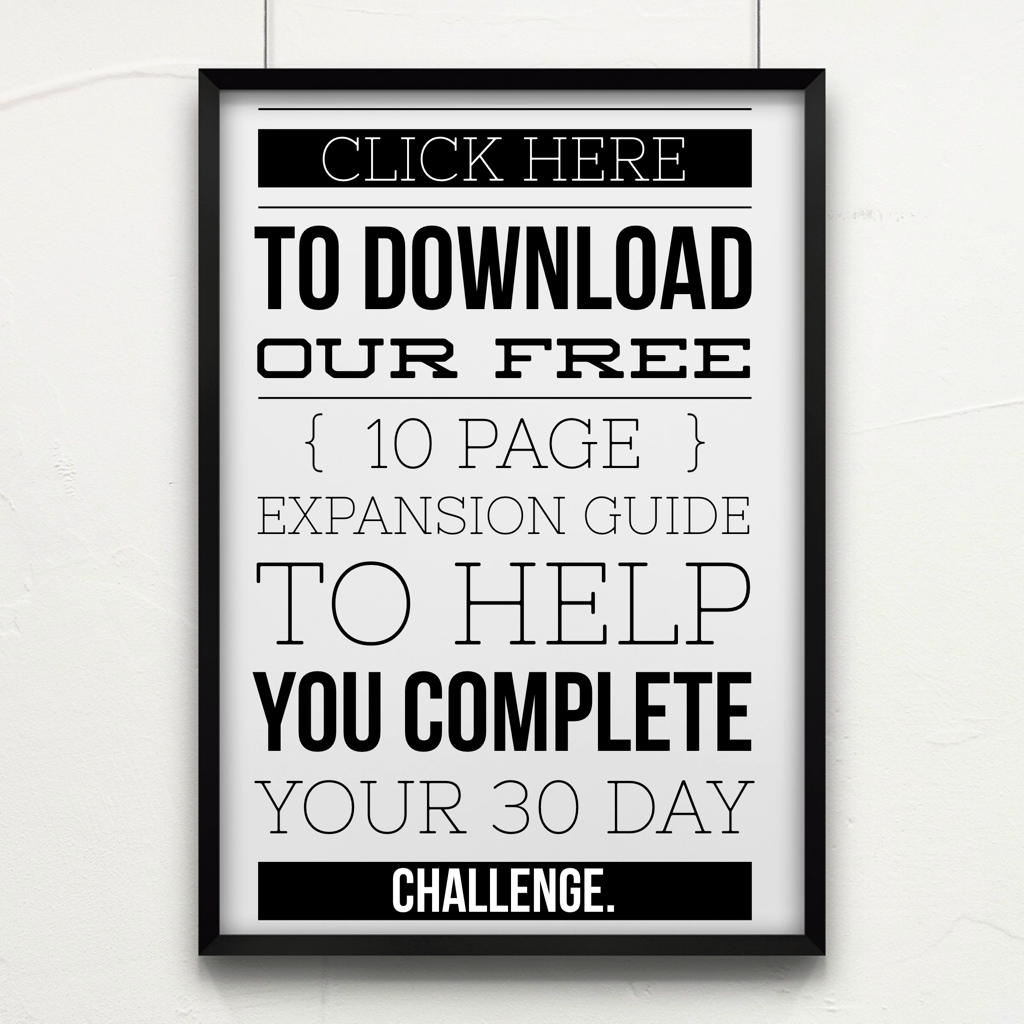 Our best recommendation, if you'd like to see how much better life is without alcohol, is the 30 day no alcohol challenge.

You can do anything for 30 days. And it might just change your life for the better, forever.

Ready to accept this challenge? Looking for tips, ideas, hacks and strategies to do it? Watch the video above and download our free 10 page challenge guide here!

The Power of Habit, By Charles Duhigg

The Sedona Method: Your Key to Lasting Happiness, Success, Peace and Emotional Well-Being

The Easy Way to Stop Drinking

The 30 Days No Drinking Experiment: Part 1 (What Happens When You Quit Cold Turkey)

Why You Should Quit Coffee & Drinking For 2 Weeks

Here’s How This Man Quit Drugs, Alcohol, And Junk Food And Lost 125 Pounds

10 Reasons You Need To Quit Drinking

7 Things I Learned During My Year Without Drinking

In the spirit of continued learning and transparency, I think an addendum to this post is really important at this point. It's become a very popular video and a lot of people have reached out to add their viewpoint to the discussion. Most of the feedback has been constructive and positive, and some has been really enlightening as well.

I'm not, nor I never was, as I point out in the video, substituting my experience for medical advice. If people need therapy and counseling, I am not qualified to provide it. Frank and I are only sharing our story, and it's objectively helped a lot of people.

Since its been up I've received no less than 200 emails/messages/comments from people who have quit drinking for a long period of time or altogether and they credit this video and it's supporting materials as a reason or the reason.

We never made it with full blown alcoholics, or whatever the correct and acceptable term for people who might need medical attention to treat an actual disease, in mind.

Not that we don't want to help those people, I for one lost my Dad and best friend in college to this disease. I absolutely want these people to get the help they need. There are people who love them and want them to heal. There are those, like me, who wish they could have done something before it was too late.

Alcoholics are not the target audience for this video, nor would we be medically qualified to help them if they were.

We touch on this in the video, but it bears mentioning again. We are only addressing people who want to quit alcohol for a short period of time to gain clarity and insight on their lives and for peak performance reasons.

These are the in between folks who may not be happy with the role of alcohol in their lives, but have it in their power to stop drinking on their own accord.

I'm not medically qualified or professionally licensed to draw that line, but I am confident it exists, based on my own anecdotal experience.

People who, like me, do not wish to label themselves one way or the other, they simply don't want to drink anymore and don't want to be harassed or stigmatized about it.

If someone is an alcoholic ie physically addicted to alcohol, then they should seek medical attention, or whatever other program someone with more experience in the subject would recommend.

In the mean time, the video is helping a certain subset of people, and was never meant to be a cure all for all people in all situations.

It's really just two guys who quit drinking for a while, sharing their experience. That was the intent, to help and serve and in that it served it's purpose.

It's now the number one YouTube result for its keyword. Which is amazing and humbling. Thank you for all the support.

The outpouring of great feedback has been overwhelming… but it's not without its admitted shortcomings.

Heavy drinkers aren’t necessarily alcoholics, but may be “almost alcoholics”. I just picked up a book of the same title, and have been having conversations with some really smart people who understand this way better than me.

Here's an excerpt from a conversation with a mentor which is particularly thought provoking. His mission is to help people afflicted with this illness, and he is fighting a good fight.

Nearly one-third of American adults are “excessive” drinkers, but only 10% of them have alcohol use disorder (alcoholism). Those numbers, published yesterday in a national survey, shine a new light on alcohol consumption in America.

“This study shows that, contrary to popular opinion, most people who drink too much are not alcohol dependent or alcoholics,” said Dr. Robert Brewer, Alcohol Program Lead at the Centers for Disease Control and Prevention (CDC) and one of the report’s authors, in a press release.

Alcoholism, now formally known as alcohol use disorder, is a medical condition that applies to individuals who have strong cravings for alcohol, can’t control their drinking, show withdrawal symptoms if they stop drinking, and continue to drink despite health or other alcohol-related problems.

The new study, done by researchers with the CDC and the Substance Abuse and Mental Health Service Administration, found that about 70% of all American adults drink alcohol at least now and then, about 30% report excessive drinking, and 3.5% have alcohol use disorder. It is higher among heavy drinkers (10%) and binge drinkers, ranging from 4% among those who report binge drinking once or twice a month to 30% among those who binge drink 10 times or more in a month.

The knowledge that only 10% of heavy drinkers are alcoholic may be reassuring, but that doesn’t mean the other 90% don't have problems with drinking. I spoke with Joseph Nowinski, PhD, coauthor of Almost Alcoholic. In the book, Nowinski, a clinical psychologist in private practice, and coauthor Robert Doyle, MD, a psychiatrist at Harvard-affiliated Massachusetts General Hospital, describe how drinking negatively affects up to one third of drinkers who aren’t classified as having alcohol use disorder.

“There are many people in the almost alcoholic zone who are having alcohol-related problems with their health, their relationships and social lives, and even their work, but who don’t connect the dots between these problems and their drinking,” says Nowinski.

“These people dismiss the possibility of being an alcoholic—and they truly don’t qualify under current definitions—but may need to take a step back to look at how drinking is affecting their lives.”

You can find out where you fall on the by taking the Where Do You Fit in the Drinking World? quiz that Nowinski and Doyle developed for their book. If your score is 9 or above, the suggestions and solutions in Almost Alcoholic may be helpful.

A drink a day, especially with a meal, has been linked to lower risks for heart disease, diabetes, and a host of other conditions. But seven drinks in a day can lead to an inflammatory response that tips health in the other direction.

“This may be important as we approach the holiday season and festivities invite heavier alcohol consumption,” says Doyle.

This mentor has lost a lot of people over the years to this disease, as have I, and urged me to add this layer to the discussion.

Long story short. If you think you might have a problem, get help, don't just watch a YouTube video and try to white knuckle your way through a potentially life threatening situation. That could endanger your life. So please, do the right thing, even if you don't think you have a problem.

Maybe, just maybe, if it walks like a duck and quacks like a duck, it's a duck. It's certainly worth getting another opinion or two, especially if your life depends on it.

Your life is too important to be toyed with. Get the help you need if you need help. We cannot be held responsible if you fail to do this despite our warnings and clarifications.

Thank you for your continued support and for adding to the conversation. You are greatly appreciated.